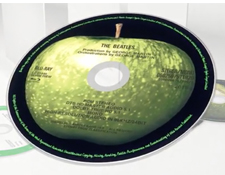 The Beatles' White Album 50th Anniversary boxed set (coming out in early November) celebrates the legendary eponymously-titled 1968 LP and it's a doozie! In this new multi-disc collection you get two CDs containing a brand new Stereo remix by producer Giles Martin and engineer Sam Okell, a CD of long sought-after demos produced by the band prior to heading into Abbey Road Studios and an additional three CDs of session outtakes. And if that weren't enough you get a high resolution Blu-ray Disc containing not only the new Stereo and the original Mono mix but also a brand new 5.1 Surround Sound mix, playable on your home theater system. Available in 96 kHz, 24-bit PCM Stereo, DTS-HD Master Audio 5.1 and Dolby True HD 5.1 options, that's a whole lotta White Album joy to explore, so lets just dive in...

For this first part of our review series exploring The Beatles' White Album 50th Anniversary boxed set we'll focus on the brand new first time ever 5.1 Surround Sound mix. The notion of remixing an album like The White Albuminto Surround Sound might not be immediately apparent as a "necessity" (hey, none of this is exactly "necessary" but it sure is fun!). Recording much of this album on early eight-channel multi-track tape afforded The Beatles more creativity in terms of not just how many layers of instruments they could record but also the natural-ness (if you will) of the mix. Accordingly, many fans -- myself included -- preferred the old original Stereo mix over the Mono version (initially only released in the UK) because it sounded a bit more widescreen.

In keeping with the process that producer Giles Martin executed so successfully with the Sgt. Pepper's Lonely Hearts Club Band remixes, this new Surround Sound incarnation of The White Album is even wider-screen still, frequently revelatory and at times even jostling (in a good way). Rather than re-explain the process the producers have to go through to make this happen, I am including a link back to my earlier review of the Sgt. Pepper remixes which goes into that sort of detail which is likely applicable to this new project (click here). That said, reissue Producer Giles Martin explains their overall intention with the current project in the written introduction to the hardcover book included with this new edition:

"In remixing 'The White Album' we've tried to bring you as close as possible to The Beatles in the studio. We've peeled back the layers of the 'Glass Onion' with the hope of immersing old and new listeners into one of the most diverse and inspiring albums ever made." 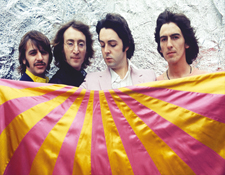 While we'll look at the new Stereo mix in The Beatles' White Album 50th Anniversary boxed set in more detail later in in this review series, the new Surround Sound version we're about to explore is a fine complementary experience, informed by the original mixes while offering a fascinating new way to experience some of your best loved Beatles music. For the most part the producers wisely chose to keep the listener focused front and center in this new remix, presenting the core of the band in mostly enhanced (if you will) Stereo, judiciously using the rear channels and three dimensional space where appropriate (and, perhaps, where technically feasible!). This makes sense given the way the album was recorded. According to the official press release for the set:

"The Beatles' approach to recording for 'The White Album' was quite different from what they had done for 'Sgt. Pepper.' Rather than layering individually overdubbed parts on a multi-track tape, many of the 'White Album' session takes were recorded to four-track and eight-track tape as group performances with a live lead vocal.... This live-take recording style resulted in a less intricately structured, more unbridled album that would shift the course of rock music and cut a path for punk and indie rock."

Overall, the 5.1 mix is very tasteful and some tracks work better than others. For the most part I found the mixes engaging and most importantly it sounds very much like what The White Album should sound like. I didn't sense any drastic changes to the feel of how the music was originally recorded. It seems that the producer's surround mixing creativity grew accordingly / appropriately as the music became more experimental, reaching a wild peak at "Revolution #9." 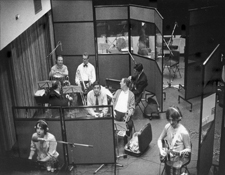 Given that The Beatles' White Album 50th Anniversary boxed set is a deep-dive (and somewhat pricey) collection, I thought that a run down of some highlights of what I have heard thus far while listening to this new Surround Sound mix might be appreciated. So -- spoiler alert -- following are some details on what you can expect in 5.1:

"Back In The USSR" features harmonies in the rear channels and hand claps which are very audible (more akin to their presence in the Mono mix). It is interesting to hear piano coming in from the rear.  Its also nice to hear the "ahhhhhs" on the bridge section of "Dear Prudence" moving front to rear. The drums there are a bit bright but the double tracked guitars in the rear channels are super cool. Gimmicky though it may appear as you read this, hearing the vocal "round and round and round" refrains subtly circling the room sounds pretty nifty! There is no full fade out on the ending here and that works neatly in this new incarnation as a new and different thing.

"Wild Honey Pie" is trippy fun in the surrounds and the guitars sound a bit more  -- for lack of a better phrase I'll make one up -- "sproingier!" Meanwhile in "The Continuing Story Of Bungalow Bill" Lennon's vocals are pretty hot in the mix, which is a treat! His "All the children sing" calls-to-action pop up in the rear but the real star of this show is when Bill's "horse" clip-it-y-clomps through your living room at the end!  You can also hear Yoko's vocals more clearly now and from the book included with the set we learn that Ringo's wife, Maureen Starkey, was in there for the singalong choruses! 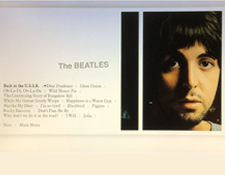 "Martha My Dear" has punchy horns and the vocal are super clear, but I especially love being immersed in the string section on this song. On "Blackbird," Paul's foot tapping feels almost alarmingly natural to the point where if you close your eyes it feels kind of like he's there playing there for you in the room. Hearing the birds tweeting from the rear is heartwarming and lends a light immersive sensibility while keeping the feel of the original in tact. "Piggies" is one of my favorite Surround Sound mixes in The Beatles' White Album 50th Anniversary boxed set. The tambourine is super up front and the loud piggies steal the show (from behind!). George Harrison's acoustic guitar sounds rich, buoyed by rear cellos. I think I even heard a little extra bonus snork on the first chorus, which is different from on the original Stereo mix. I don't know about you, but I like my snorks big and in this mix its almost like having a little barnyard suddenly appearing in your listening space.

"Rocky Raccoon" works surprisingly well in Surround Sound, revealing sweet sensitivity from Ringo's opening-closing Hi Hat Cymbal as well as his brush work on the Snare Drum.The rinky-dink "Tack Piano" sparkles in the rear as do the harmonies. "I Will" also works surprisingly well in Surround Sound where you can more clearly hear Paul McCartney's (likely) overdubbed "doot doot" vocalized bass lines from behind and Ringo's gently sympathetic Cymbal work is much more apparent. The Shaker in the rear is tasty icing on the cake.  "Julia" is room filling and gorgeous; this is as close as most of us will get to having John Lennon playing in our living rooms. 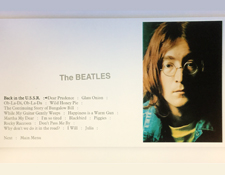 "Birthday" comes with a word of cliche advice: play this track LOUD as it really rocks! The Bass is super audible now, you can almost feel Paul plucking the strings. And there seems to be an overdubbed Snare Drum hit in the rear. Now you can also quite clearly hear Patti Harrison and Yoko Ono singing the high harmony "Birthday" background vocals on the bridge. Not surprisingly,"Yer Blues" places a very big reverb on Lennon's vocal, which defines this mix; I rather like it although I realize there are some of you out there who might find it too large! One other curious thing I noticed is that there seems to be a tighter edit after the solo section on this song just before the song ends, so it no longer feels like a rough tape splice as on the original Stereo and Mono mixes (which was actually a kind of cool thing, but I'm not complaining here... just pointing out the difference).

"Sexy Sadie" envelops you with Piano and that sort of bendy-pitchy-melty effect on the instrument in this song is more apparent in this new Surround Sound mix. The Bass is more prominent now and there is a cool Guitar bit at the end I don't remember hearing previously.  "Helter Skelter" is another one to Play Loud! You'll feel the harmonies around you and Ringo's Drums are just massive. Some of the guitar swells seem to flow through you. The breakdown is a little different and some new talking is now audible in the mix. Ringo's Drums are also huge on "Long Long Long" where you can almost feel the air pushing through the Tom Tom heads as he hits them. George's acoustic Guitar strums are equally up-front and rich. And of course it is super cool hearing the weirdness at the end of the song in Surround Sound. 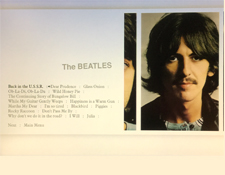 "Revolution #9" is as trippy as you might expect it to be, using all channels aggressively. And it works!  Now you can hear everything that was going on in this still stunning audio pastiche, a truly frightening snapshot of what 1968 was all about. Don't listen to this under the influence of anything! If you thought this piece was madness on headphones, it is now an even more intense "musique-concrete" experience in Surround Sound. You'll hear different details coming at you from all directions. While I don't have any specifics on how this 5.1 mix was created, given that the piece was originally recorded as a "performance" mix of tape loops down to two-channel Stereo, one can guess what the producers did here to create the Surround Sound version. Ultimately, how it was made doesn't matter much because the final result is what counts and Giles Martin's Surround Sound mix is aggressive, immersive and (appropriately) at times downright scary! It is a fascinating interpretation of John and Yoko's original vision and a whole new way to explore this piece. Depending on who you are playing it for, this might even be a good demo track to put your home theaters system through its paces! 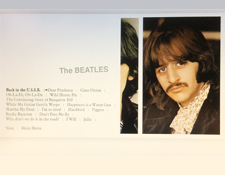 So, there it is: we can now hear The White Album in 96 kHz, 24-bit 5.1 Surround Sound!  Apart from some initially awkwardness figuring out how the "set up" screen worked, my experience with the Blu-ray Disc in The Beatles' White Album 50th Anniversary boxed set has been quite wonderful. There is even a very thoughtful, fun screen saver built in, cycling iconic portraits of the band from the original album.

Stay tuned for Part Two of this review series where I will explore the wealth of outtakes and other rarities in this wonderful collection.