AS part of Yoko Ono's Meltdown the Yoko Ono Plastic Ono Band will perform on Friday 14 June 2013 at the Royal Festival Hall. Meltdown brings together Yoko's favourite artists and musicians from around the world for some one-off events. For more info go to http://www.southbankcentre.co.uk/whatson/festivals-series/yoko-onos-meltdown

UPCOMING FAIRS where you can meet us

for details check out our 'EVENTS' page.

STEVE HOLLEY plays with Dutch Band ONE AFTER 909

On 30 March the 34th annual Beatlesday in The Netherlands featured drummer Steve Holley (Wings 1978-1980) as special guest. Dutch (nearly famous) band ONE AFTER 909 took care of the music all day and Steve played a nice set with the expanded (+saxes, trumpets) band. Here a nice video of one of the songs they performed:
http://www.youtube.com/watch?v=_4Ls3DXDqNI
Well done Pim & friends!!!!

Next year...April 19th, same venue in Nieuwegein, the 35th annual Dutch Beatlesday. See you there! 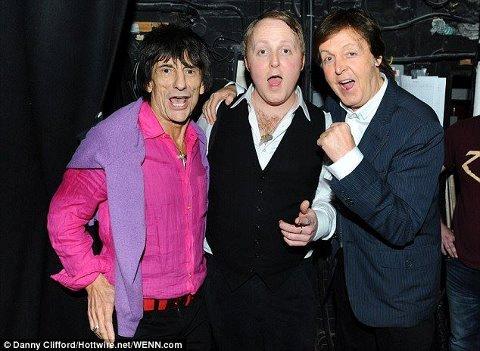 James McCartney was joined on stage by his dad and Ronnie Wood during one of his shows at the Ambassadors theatre, London, last night 27 March 2013. The rest of the McCartney family, including Stella, was also present during the show. Watch a clip from the show here http://www.youtube.com/watch?v=6wMudBS9dkY

VERONA New Date Out There! Tour

Paul has added a new date to the Out There! tour. He confirmed today that he and the band will be returning to Italy to play at the Roman Amphitheatre in Verona on the 25th June. For more info and ticket details go to www.paulmccartney.com

Check out this brand new website dedicated to the work of photographer Robert Whitaker: www.robertwhitakerphotography.com

The website is set-up by Robert Whitaker's son Benjamin.

Paul has announced his first live date of 2013, which will be part of an all new tour called ‘Out There!’. The first will be at the National Stadium in Warsaw, Poland on the 22nd June. A second date is a show in Vienna on the 27th June. More dates to be announced over the coming weeks so watch this space!

The Hilton Hotel in Amsterdam, where John and Yoko held their famous bed-in, has been given the title 'national monument' by the Dutch governmental department for Cultural Heritage.

The Grammy Museum and seven time Grammy winner Ringo Starr, will debut a major new exhibition called Ringo: Peace & Love which opens on 12 June, 2013. This one-of-a-kind, limited-run exhibition will offer visitors an unprecedented in-depth look at all aspects of Ringo's musical and creative life. It will also aim to promote Starr's universal message of peace and love. Ringo: Peace & Love is the first major exhibition ever dedicated to a drummer.

PHOTOS Of Shea Under The Hammer

Photographs from The Beatles' record-breaking Shea Stadium show are to go under the hammer this month. No less than 61 pics, taken by amateur photographer Marc Weinstein, are expected to fetch £15,000. The sale of the pics is on 22 March at the sale at Omega Auctions in Stockport. Check this link for some of the photos: http://www.dailymail.co.uk/news/article-2287472/Photos-The-Beatles-Shea-Stadium-expected-fetch-15-000-auction-mark-50-years-album.html?ito=feeds-newsxml

It's Record Store Day on 20 April. For the occasion, Paul McCartney will release a limited edition 12-inch EP of the live version of Maybe I’m Amazed which was originally released on Wings Over America. The release fuels rumours of the upcoming release of Wings Over America and the first-ever DVD release of Rockshow. No specific date has been mentioned for this however. Keep you posted!