on a Wednesday afternoon where he tells us about the history of Cavern City Tours and International Beatle Week. ‘The event started in 1981, as a Beatles convention. It was organized by Jim and Liz Hughes. It was then a two-day event in August,’ Dave recalls. ‘In 1985 the Liverpool Tourism Department decided to put the full weight of their organization behind it in terms of press, marketing and publicity.’ The move completely changed the event because for the first time ever, there was now this powerful force behind it that packaged the entire event and sold accommodation and ticket events in a totally different way.

So the 1980s really kicked it all off as far as a Beatles convention was concerned. Nothing had been done in the 1970s apart from one event in 1977 that was organized by Allan Williams, but according to Dave this was only a one-day event. ‘Jim and Liz created this two-day event at the Adelphi where people could buy rooms, but it was more or less left to the people themselves to buy rooms from the hotel. But it really was the start of creating the entire event. And 1985 was a hugely successful year and it gained more publicity than it had ever done before,’ Dave explains.

Dave got involved with Cavern City Tours late 1985. Before that he’d been a professional tourist guide working for the tourism department and the county council. He was then asked to join CCT to help organize the Beatles event in 1986. ´Bill Heckle, my co-director, and I put our heads together and we came up with the plan to extend the weekend and make it a four-day event. Bill, by the way, is a huge fan of the Beatles. Far more so than I am. I am more a fan of Liverpool the city.’ With a Beatles fan and a Liverpool fan heading Cavern City Tours, a perfect combination it seemed, the event quickly grew. And before they new it, Dave and Bill were organizing a full week event. ‘What happens nowadays is that the event attracts huge numbers of people and a lot of them also make their own accommodation arrangements,’ Dave explains. ‘We estimate that we get about 40.000 people just for International Beatle Week. 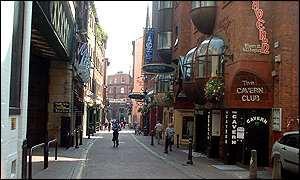 And then there’s the people that come for the Mathew Street Festival and people that come to Liverpool that weekend simply because Liverpool is a very popular tourism destination, regardless of what Cavern City Tours does. Because let’s face it,  not everyone comes to Liverpool because of the Beatles.’ According to Dave this latter group, that comes to Liverpool during International Beatle Week is pleasantly surprised, or shocked, when they realize the full extent of the event. Which is a good thing because as we all know, especially people from outside the UK, often still have an image of Liverpool as being a dark, grey and industrial city, where nothing much happens. 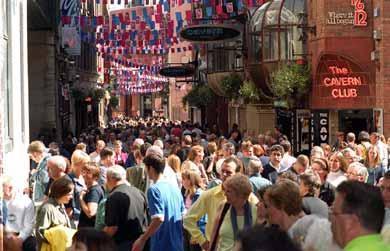 Dave: ‘I have a pride and a belief in my city, even back in 1980 when a lot of work needed to be done to improve things.But the city still had these great landmarks and part of it still looked great. The river and the docks were a feature and we had great assets like the Beatles and the rest of our musical heritage and obviously there’s the sport with football, horse racing and golf.’ So the ingredients were all there, according to Dave. All Cavern City Tours had to do was to put them together and come up with the right recipe. And they came up with the perfect recipe with an excellent festival that not only serves Beatles fans from all over the world but also people who are interest in other sorts of music, culture and the arts.

So Cavern City Tours plays an important role in getting tourists to come to Liverpool. The organization however, does much more than just organize International Beatle Week. Dave: ‘We employ 48 people. We have various activities here at the Cavern Club and across the road we have the Cavern Pub and these two places are open the entire week. The only day in the year that both places are closed is Christmas Day. So we are open 364 days a year and there’s a lot of work that goes into that. Most of the people that we employ work at these two premises. And they have to work on a daily basis, regardless of International Beatle Week. Throughout the year we have music here at the Cavern Club every afternoon and every evening. So that’s a busy programme.’ Also part of Cavern City Tours is Magical Mystery Tour which also runs on a daily basis with only three days a year when it does not operate. But this is only because on these days the coach company doesn’t operate: Christmas Day, Boxing Day and New Year’s Day. And then there’s of course the Mathew Street Festival. So for the people at CCT there’s no time to put their feet up after International Beatle Week in August because the show must go on 364 days per year. 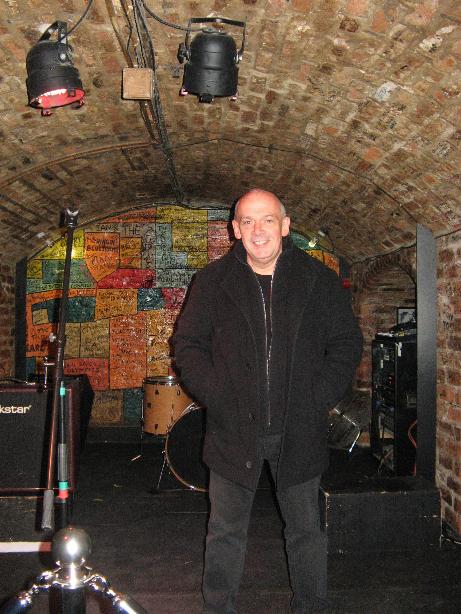 Cavern City Tours is in fact a family business with both Dave’s granddaughter and his wife and Bill’s daughter working for the company. Dave: ‘Most people that work for us also have relatives working here. We don’t advertise for staff. You also have to be a special person if you want to come and work for us. We are not a run-of-the-mill organization. We operate independently and in an unconventional manner perhaps, compared to other organizations. That doesn’t mean we don’t do the job properly but we do it in a more casual, relaxed way. That’s the basis of our success I think. And although there is a hierarchy, we are really all friends.’

Dave’s main job is looking after the tours, not just the Magical Mystery Tour but all other tours as well. Another job of Dave’s is to secure all the hotels for International Beatle Week and to negotiate all the rates. And he also looks after the day to day finances and the merchandise: ‘The merchandise is about the only thing that’s sexy to me. A lot of the day to day things I do, like health and safety and insurances, I don’t really enjoy but when doing it you realize it’s what the business needs. To stay in business these days is tough but we’ve been around now for 27 years so we must be doing something right.’

And while there’s plenty of possibilities for the festival to grow, CCT instead tries to consolidate in what it does and try to grow qualitatively as opposed to quantitatively. According to Dave the product that CCT offers is not so much about numbers but rather about improvement. Can the festival actually get any bigger than it already is? ‘Yes, I think so. There’s lots of more we can do and we know exactly what we want to do and how we want to do it. I think a big step ahead is developing our brand in as many different ways as possible. But we’re fortunate that the product we have has a global appeal and that our market place is the world.’

Cavern City Tours doesn’t seem to be affected too much by the recession of the past years. Contrary to other businesses that have suffered from the global credit crunch. Dave: ‘People still do what they enjoy doing the most. And they actually spend more money on that. So there certainly hasn’t been a downturn in the Beatles industry in Liverpool because of the economic recession.’ 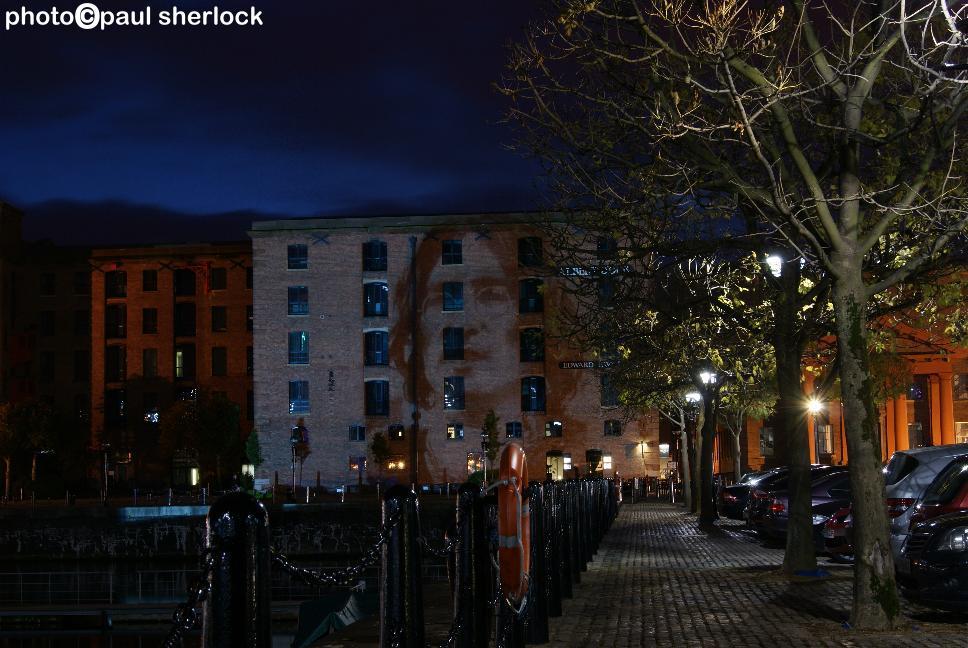 Dave is proud of the city of Liverpool and the music of the Beatles and speaks with great passion about both. ‘The Beatles story is a true Liverpool story. Their families lived here, they were born here, they went to school here, they developed here, and they all became famous while they still lived in Liverpool. Hamburg and Abbey Road Studios were important ingredients but before 1963 the whole story is truly a Liverpool story.’

But the whole Beatles story also has a tragic element to it. This is of course the murder of John Lennon on 9 December 1980 which had the city shocked and mourning for days on end. Dave remembers it quite well: ‘When Lennon’s death was announced people thought that was the end of the road. Up until then there had always been speculation about them getting back together again. There was always this belief. But when Lennon died it was the end of the story. Personally I thought immediately that something had to be done here in Liverpool. I had just begun as a tour guide and I had grown up in the same city as they had. I felt that there was no one better equipped to tell the story than me. And others felt the same. John’s death was a wake-up call for Liverpool, really.’ Dave also feels that John’s death was the catalyst for the development of Beatles tourism to the city. What happened next was that the original Cavern site was excavated like an archaeological dig. And the new Cavern was opened in 1984. ‘When John’s death was announced I was on my way to university and when I heard what had happened, my instincts just led me to Mathew Street. And the street was full of people. I thought that if this is how people feel locally, how will they feel elsewhere? It was a very moving morning.’

So the business of introducing people to the story of the Beatles in Liverpool actually started here. People wanted to know more about the history of the Beatles and the city they came from. People were coming to Liverpool and they had to be catered for but up until that moment Liverpool didn’t have much to offer the fans. ‘People had been coming to Liverpool since 1963, but sadly it took the death of John for people to realize that maybe we should pay some more respect and attention to this city.’

Beatles International would like to thank Dave Jones doing this interview with us. If his story has got you interested in Liverpool and its musical and cultural heritage and if you want to visit the city yourself, then please visit www.cavernclub.org. The International Beatle Week programme for 2011 is now online.