9 February 2011 will mark the 50th anniversary of the Beatles' first appearance at the Cavern Club. On the 9 February 1961, John Lennon, Paul McCartney, George Harrison, Pete Best and Stuart Sutcliffe were paid the total sum of £5 for what would become the first of nearly 300 appearances that the Beatles made at "the most famous club in the world". The Cavern Club is celebrating of course with a day of music and events which I will tell you about in future articles.

Here in Liverpool the saga of 9 Madryn Street, Ringo's birthplace, continues to rumble on with letters appearing more of less daily in the local newspapers either for or against demolishing the 444 " Welsh Street" houses which include the former home of the world’s best known drummer. The good news, as far as I am concerned, is that rumours of a deal that will save Ringo's birthplace seem to be getting serious consideration by Liverpool City Council. The leader of the council said "he will do the right thing". Fingers crossed that "the right thing" is not to destroy the birthplace of one of the most famous people in the world. I do and always have argued with local people who have the opposite point of view to me is that whether you like Ringo or loathe him (which sadly some local people now do after comments made by Ringo on a BBC TV show in 2008), he is a Beatle. Therefore, he is is one of the most famous people in the world. It is a disgrace to even consider destroying the guy's birthplace. Most importantly because people come from all over the world to our city to see these things and spend money in the local economy.

Another building that has a Beatle link and is in the local news currently is Woolton public swimming baths. Woolton of course was home to John Lennon from 1945 to 1963 living at Mendips with his Aunt Mimi and Uncle George. Young John would have learnt to swim at these baths and I’m sure spent many happy times there. 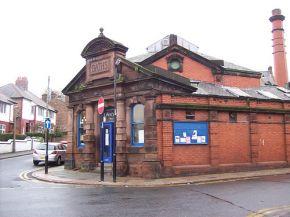 However, this is in fact an issue for the Woolton community and really has nothing to do with any John Lennon links. It is not a building which would normally form part of a Beatles tour.

The baths are an important part of Woolton Village and are needed for school children and all local people for enjoyment and fitness reasons. If they were to be closed people would have to travel for at least 4 or 5 miles to other swimming baths, which of course is no easy task if you rely on public transport. Therefore, I was a little annoyed to see a comment on a news website from somebody in the USA telling the people of Liverpool to "get a grip" and stop protesting every time something with a Beatle link has to close or be knocked down. The person obviously has no idea that this is not a Beatle issue but a real community issue and he was ill advised to make those comments.

As far as I am aware the Woolton baths suddenly closed in late September 2010, and a notice was put up to tell swimmers that this was a temporary measure due to "technical problems". It has since failed to reopen and as it’s a very old Victorian building rumours are circulating in the local community that the council wants to close the baths for good as part of their cost cutting budget savings. I’m sure that everybody at Beatles International wishes the people of Woolton the best of luck in saving their swimming baths.

Hopefully this feature has brought you up to date with events here in Liverpool. In the meantime, if you need any help, advice or assistance about your trip to Liverpool, wish to book a tour with me, or just have general questions about the home of the Fab Four then please contact me on This email address is being protected from spambots. You need JavaScript enabled to view it. or through Beatles International. Please be aware that not all Beatle guides in Liverpool are qualified, so be careful when taking your trip of a lifetime and ask to see their qualifications before you book with them.