We associate The Beatles' spiritual lives with their journey to Rishikesh to study with the Maharishi. However, that journey can be traced back to their childhood and their families, where circumstances and family life shaped their spiritual thinking and rebellion from an early age. 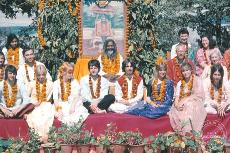 In Liverpool, a mixed-marriage was defined by religion, not race or skin colour. For Paul and George, they each had one parent who was Protestant, and one who was Catholic. Ringo's parents were Protestant Orange Lodge, who preach a hatred of catholics, yet Ringo's mother Elsie had a best friend who was a Catholic.
Pete Best's mother grew up with Eastern influences, as well as a Catholic upbringing too.

This is at the heart of who The Beatles were, and so I recorded a short radio series for BBC Radio Merseyside, with a quick look at The Beatles together; John; Paul; George; Ringo and Pete, and
they are now podcasts on my website at
http://www.facebook.com/l/75415RqXhshj1m4wYEb6xXWAIvw/www.liddypool.com/podcast.html
which I hope you enjoy. I also hope this will give you a better understanding of the boys who became The Beatles.