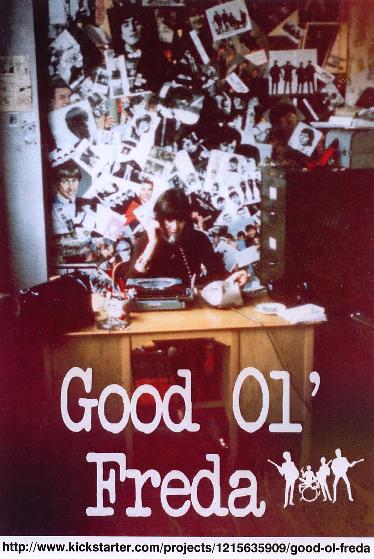 AUSTIN, Texas (Reuters) - For Freda Kelly, secretary to the Beatles and chief of the band's fan club, work sometimes involved trailing the Fab Four to the barber shop, sweeping their locks from the floor and mailing strands of hair to adoring female fans.

Kelly, one of the Beatles' longest-serving employees, worked for the band for more than a decade - longer than the British band was together - but has never shared her stories publicly until now.

She breaks her silence in a new documentary, "Good Ol' Freda," to have its world premiere on Saturday on the second day of the South by Southwest Film Festival in Austin, Texas.

"It's such a classic Cinderella story: Girl picks the job of a lifetime," director Ryan White told Reuters.

The tale is sure to delight Beatles fans, but White seeks to tell a story that transcends that audience, a story about an amazing decade in an otherwise ordinary life.

The film features four Beatles songs, which required the permission of many people, including the living Beatles. It also includes never-before-seen photos of the Beatles.

A mutual friend and a family connection to the 1960s Liverpool music scene brought Kelly to the attention of White, who took the opportunity to tell Kelly's story.

The Los Angeles filmmaker, 31, who directed and produced the 2010 soccer documentary " Pelada," grew up knowing Kelly as a family friend who was a secretary. In fact, she is still a secretary, for a Liverpool law firm.

"I didn't know that she had a crazy back story," White said, adding that he only discovered it when a mutual friend put them in touch two years ago.

Kelly, now in her late 60s, told White that now that she has a 2-year-old grandson, she wanted to record her stories for the boy - stories that in many cases she never got around to telling her family.

Shy and humble, Kelly insisted that no one would be interested in hearing her story, White said.

The loyal secretary, who was 17 when she started working for the band, has no intent of dishing dirt about her former famous employers, so White focused instead on her compelling personal narrative and her own interactions with the Beatles.

Kelly arranged bookings, cut wage checks and figured out how to run a fan club at the height of Beatles mania. Girls would send her four sticks of gum which she would hand out to the band members, then she would wrap the chewed gum in paper and mail it back to the fans.

They entered the Guinness Book of World Records in 2001 as the world's best-selling group, with more than 1 billion records sold.

"The amount of personal attention and true affection that she served the Beatles' fans with - teenage girls, mostly - will probably go unmatched throughout music history," White said.

The film's title comes from The Beatles' 1963 Christmas recording in which George Harrison thanks their secretary in Liverpool and they all yell in unison "Good Ol' Freda"".