The Best of Apple Records 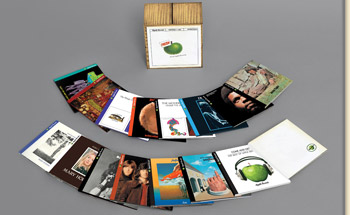 Launched by The Beatles in 1968, as the new outlet for their own recordings as well as the music of an eclectic roster of artists, Apple Records made popular music history from the very moment it opened its doors.

Four decades later, Apple Corps Ltd. and EMI Music raise the curtain on remastered CD and digital download releases of 15 key albums from the Apple Records catalogue. All 15 titles are out now. Most of the CDs include bonus material. Together, the 15 albums represent the first ever Apple Records releases to be available via digital download.

All releases are available as individual albums and inside the Apple Box Set. 'Come And Get It: The Best Of Apple Records' highlights the best hits and rare singles from the legendary label.

The dazzling range of music originally issued by Apple Records between 1968 and 1973, which is now the subject of an unprecedented multi-album worldwide campaign starting October 25th – including remastered CDs (with bonus material revealed for the first time below) and Apple’s first digital downloads – will now be augmented by two additional titles: ‘Come and Get It: The Best Of Apple Records,’ the first commercially issued multi-artist compilation in the label’s history; and ‘The Radha Krishna Temple,’ the self-titled album of devotional music produced by George Harrison.

‘Come and Get It: The Best Of Apple Records,’ a 21 track compilation of singles, ranging from the folk-rooted tunes of Mary Hopkin and James Taylor, and the energetic rock of Badfinger (also The Iveys) and Jackie Lomax, to the deep soul of Doris Troy and Billy Preston, will also be released in the physical and digital marketplace on October 25th 2010.
‘Come and Get It‘ displays Apple’s vibrant years of musical experimentation in full flower, from bona fide hit singles to the cult classics of the catalogue, as represented by brass band The Black Dyke Mills Band, Cajun collective The Sundown Playboys, and more. Hot Chocolate (as ‘The Hot Chocolate Band’) makes an appearance, as does Ronnie Spector, Bill Elliot & The Elastic Oz Band, Chris Hodge, Brute Force, and others.

Launched by The Beatles in 1968, Apple served as the new outlet for their own recordings as well as the music of an eclectic roster of artists who were all personally brought to the label by The Beatles (individually and/or collectively). In the revolutionary spirit of the times, Apple’s utopian artist-orientated mission celebrated diversity in a friendly creative environment. The result was a rainbow spectrum of music, from folk, rock and soul to The Modern Jazz Quartet and the work of contemporary British classical composer John Tavener.
As Apple Corps Ltd. and EMI Music prepare for the upcoming 17 album CD and digital download release, it is a reminder that the introduction of an artist on The Beatles’ record label was avidly followed by fans across the universe – then and now. Each of the albums has been digitally remastered at EMI’s Abbey Road Studios in London by the same dedicated team of engineers behind The Beatles’ recent remastered catalogue releases of 2009.